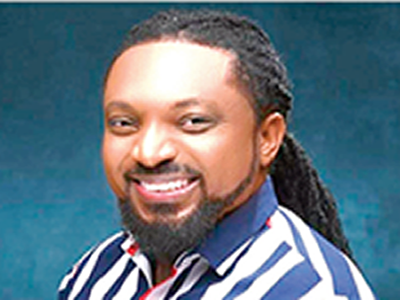 FILMMAKER, CHARLES GRANVILLE, CAPS 2019 WITH ‘MAN OF THE YEAR’ AWARD

The year seems to be winding down on a cheery note for quintessential film producer, actor and musician, Charles Granville as he caps his string of honours with a ‘Man of the Year’ award.

Granville, was decorated recently at an elaborate event which held at the Grand Oak Centre, Lekki, Lagos by the Man magazine for his sterling endeavours in the ending year, after a rigorous selection exercise.

Somehow, it has been a harvest of honours for the entertainer since he debuted as a film producer with ‘Locked’, a psychosis-themed, suspense-filled thriller, starring, Hilda Dokubo, Belinda Effah, Alvin Abayomi, Sunny Neji and himself. In his kitty so far are: ‘Special Mention Award’ at Abuja International Film Festival (Locked); ‘Best Movie Producer’ (The Intellects Award); ‘Entrepreneur of the Year’ and ‘Special Recognition’ for lead actor in ‘Locked’, Hilda Dokubo (Nigerian Achievers’ Awards).

For Granville, the honours are not just recognition for hard work, but a call to raise the stakes as he plans to embrace 2020 with firing optimism. He says: “We are releasing another movie in the cinemas from March 6, 2020. It is titled, ‘30 Pieces of Silver’, starring Nse Ikpe-Etim, Enyinna Nwigwe, Charles Granville, Deyemi Okanlawon, Keppy Ekpeyong Bassey and Jide Kosoko amongst others. We plan to shoot some major movies next year. We plan to launch the print version of our Cinematique magazine and we are looking forward to the Cinematique Awards in 2020. We will continue with our weekly online monologue challenge, Cinematique Monologue Mondays to encourage young actors discover themselves while winning $100. We are also hoping to expand our real estate investments and partner with other like minds for business growth. We intend to do more for the development of the youths in the Niger Delta as part of our CSR. So many people, too numerous to mention individually, have been part of this success story indeed. I am grateful to Victor Ojabo and Lolu Majaro for their contributions towards the making and success of ‘Locked’.

Enado Odigie started acting as a little child – from school to church – but professionally in 2014. The Edo State-born Nollywood diva had previously worked in the corporate world before delving into the make-believe industry. In this interview withEDWIN USOBOH, she shares her passion, driving force etc.

How did acting start for you and how far have you gone?

I have been acting since I was a child but in Nollywood, I would say between 2012 and 2014. I tested in 2012 and I wasn’t sure I wanted to continue. But in 2014, I finally made up my mind to continue. It has been a long journey with a lot of lessons learnt from different directors, producers and even co-actors. I have grown tremendously. I am happy with my growth and where I am. There are lots of my work that people should watch out for.

Before delving into Nollywood, what were you doing?

I was a corporate person. I worked in organizations like Globacom and then also went into the event planning, but I have a passion for acting and I decided to give acting a trial.

How did you get your first role?

I spoke to couple of friends that I wanted to act and take acting serious. Then a friend told me there was an audition coming up and gave me the address. I went for the audition and was accidentally auditioned for the lead role. Someone gave his script to a wrong person and later I was told that one was taken, so I audition for supporting role but few days later I was called and told I have been chosen for the lead role. That’s how my first movie came about.

Any regret dumping your corporate work for Nollywood so far?

Absolutely no regret. Every day, we want to be bigger but when you sit down and look where you are, there is so much to be thankful for. There is no bad experience in life, there are only a lot of lesson to be learnt. I have learnt a lot and I am very happy and looking to the future.

What would you say is the greatest sacrifice you have made to become an actress?

This is one career you sacrifice for every day. A lot of time, you don’t have time to yourself, no weekend, no public holiday and most times you work very late on set etc. Sometimes, on set production that are very tedious, you have injuries, accident, etc. Another bad side is that you don’t get to participate in the thing you would have loved to be involved in like friends and family weddings, events, family programmes, reunion etc. But I will not change it for anything.

What would you describe as your memorable moment so far?

There have been many. For any actress, having a movie that goes to the cinema, that is seen by an audience paying to go see your movie is a high point for every actor, and I have had a couple of movies going to the cinemas.

Do you get support from your loved ones, mostly your parents?

It has been a tremendous journey, I have a very supportive family. Of course, naturally they have a reservation but knowing fully well they have raised you and done everything to invest in me, I receive necessary support. And sometimes, when I make mistake my family is there to encourage me. I would just say I have a great support from my family and friends.

What is your fear in life?

Getting to the end of life and realizing I didn’t touch the things I was meant to have achieved. So, I would say my fear is a driving force to ensure I get to the finish line. I hope to keep growing and improving myself and ensure I become a bigger and a better person.

There has been a lot of stories about sexual harassment in the film industry, what is your experience?

I can tell you categorically that I have never been sexually harassed. Nobody has ever said to me, ‘come and do these in other to get this.’ Of course, people would always make passes at you as a woman. That’s interesting as I feel people want to know you by doing that. But, sexual advances as an exchange for a role, absolutely no.

How do your love ones feel seeing you kiss in movies?

Naturally, the first response is discomfort from your family and your love ones. However, when they also realise that, for instance, you have a gynecologist whose responsibility is to search the body part of a person not related to him, then they understand better. It is part of the job knowing well that it’s acting. However, we try as much as possible to create a balance based on the society that we live in.

Has this cost you relationship?

No, I am not going to lose my family because I am acting (laugh)

A man who has admirable character, who is understanding, who is reasonable, patient and, as a lady, a man who shows respect and is generous. A man who is God fearing. If he doesn’t have fear of God, he will not have respect for you.

When you are not on set, how do you spend your time?

I spend a lot of time reading, planning and attending to personal things and also spend time with my family.

Who is your crush in the film industry?

A couple of years ago, I used to like Sean Connery and Chris Hemsworth.

Tell about your role in the movie ‘Joba’.

I am Enado Odigie, I played Ore Oladiyan in the movie. Ore is married to Lami Oladiyan. As a young couple, naturally they are expected to start having children but as time goes on, they are disappointed time and time again and at some point, Ore snaps. Joba is a story about faith. At this point, the faith of the couple is tested, but because we are human, Ore falls into depression. Her trust in God fails but she has a husband like Lami whose faith is unshaken, whose faith is tested on every side. And because Ore is downtrodden, that becomes his biggest trial. Joba is a movie that also touches on lot of social issues like rape and depression because all these affect the society today. I find out that while I am watching the movie, even though I am the one that play the character, I sympathise with Ore a lot. That is also how people who are depressed and dealing with such issues usually behave.

How were you able to immerse yourself into the character?

It was difficult but that is my job as an actress. The character involves one who is sad at all time and if you’re not a sadist, sadness can be very tiring. It was emotionally, mentally and physically draining because it requires a lot of scenes back to back. But it also pushes me to know what my limits are. Warming myself to the character started from the moment I read the script and when I go on set, I had a director, Biodun Stephen, who will almost take you by the hand and journey with you to render a real life resemblance of the script.

#104 - An access token is required to request this resource. Here are some possible solutions to fix the error.